Growth Of 5G Market And Its Impact On Economy 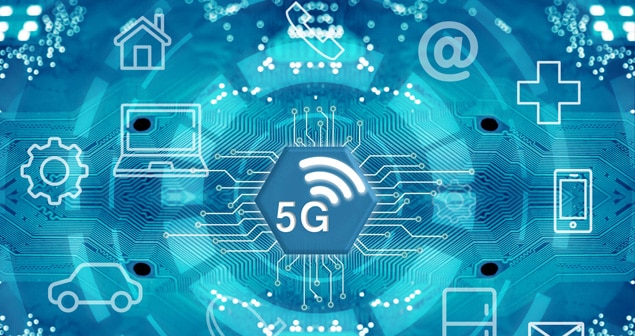 The introduction of 5G has benefitted the economy in several ways. It has helped in the growth of various new technologies such as the Internet of Things (IoT), artificial intelligence (AI), virtual reality (VR), augmented reality (AR), machine learning (ML), and blockchain. Apart from leading the growth of new business operations and applications, it has provided revenue platforms for telecom operators

Technology has been going through an endless revolution for the past couple of years. It has transformed our lives and several industrial sectors in various ways. Telecommunication is one of the major sectors that has benefitted greatly from new technologies. Mobile Internet has played a huge role in uplifting the popularity of smartphones among every age group. It all started from 2G, then moving onto 3G and 4G, and now it has entered a new phase, 5G.

The primary objective of 5G is increasing data speed while also reducing the cost of operations in terms of per GB cost. 5G will escort innovative business models, thereby providing state-of-the-art applications to individuals and scores of sectors such as industrial, commercial, educational, healthcare, agricultural, and social. All these sectors require a faster and uninterrupted network that can be offered by only 5G.

The countries that have successfully deployed 5G networks are Australia, South Korea, Taiwan, Japan, the US, UK, Germany, and a few others. They lead in terms of 5G network deployment, and site activations within the Asia Pacific have 5G non-standalone architectures that support 4G/LTE infrastructure for higher speeds.

As of now, India is home to a mere 322 million wireless broadband subscribers. However, as per a report by Edelweiss, the subscribers are expected to jump to one billion by 2025 with 5G. It is crucial as telecom is the very backbone of India’s digital revolution. 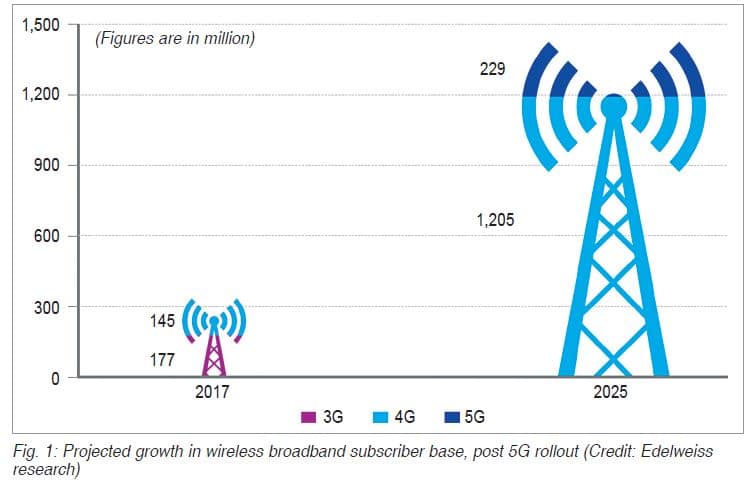 Potential market areas of 5G communication
As per IDC’s carrier transformation survey run at APeJ level, the top three 5G use cases for operator CXOs are massive IoT, remote-controlled automation, and multi-access edge computing. Under the current scenario, a gamut of interconnected products and services (smart home, smart refrigerators, smart HVAC, smart cars, CCTVs, smart devices, etc) might be an ideal play for operators, but India is still at a very nascent stage for 5G adoption.

Hence, in this context, let’s find out what the experts have to say:
Faisal Kawoosa, founder and research analyst at techARC, says, “Due to the ongoing Covid-19 crisis, we have seen how much we can leverage from a robust and fast broadband connection. We believe that we have several use cases like industrial automation, high-speed home broadband, or immersive collaboration, be it for education, healthcare, or just office collaboration. Then there are use cases like ultra-rich multimedia content where we can use AR/VR for entertainment and gaming.”

Rajan S Mathews, director general, COAI, says, “With 5G, technologies such as autonomous driverless cars, smart transportation and logistics, smart farming, drone patrolling for road safety, holograms, and remote robotic healthcare are expected to enter our world and become more and more pervasive by the day. The technology is poised to open up a plethora of possibilities in terms of business models, better education, healthcare, smart cities, smart manufacturing, intelligent logistics, and overall enhanced lifestyles. The potential can be imagined by the fact that by 2026 there will be an estimated 619 billion dollars revenue potential for telecom operators.”

Yash Jethani, research manager, Regional Telecommunications Team, IDC Asia/Pacific, says, “For operators, new areas are clearly in education, healthcare, and government (public sector as IDC defines it) in the Covid environment, but in the long term, driverless connected cars, 4K/8K streaming, smart cities, and mixed reality/immersive videos are some interesting use cases for Asia/Pacific operators. India’s aggregate telecom spends on fixed data and fixed voice is thirty per cent and forty per cent, respectively, from B2C. B2C spend is even more predominant in the mobile data and mobile voice segments. Hence, for any future uptake in the market, the B2B focus also gives operators newer avenues to explore. With newer avenues, there will be numerous opportunities to capture under the government’s push with Digital India.”

When can we expect 5G in India
As per the Organisation for Economic Cooperation and Development (OECD) committee on digital economic policy, 5G will not only amplify the country’s GDP but will also open up new avenues of employment and digitise the economy. 5G will also open opportunities for India to connect with global markets and take advantage of economies of scale. The 5G high-level forum is drawing up an action plan in this direction. 5G once implemented, will open up new avenues of revenue for service providers.

To justify the statement, Yash adds, “Covid-19 has definitely impacted the progress. There are now signs of coming out of it amidst fresh PE investments/FDI in the sector and regulatory support, but CAPEX spend as per IDC is expected to remain muted for Indian operators over 2019 to 2024. This is largely due to the fact that any increase in material change will not immediately result in the CAPEX increase. Plus, Reliance Jio has already shown its interest in vendor-agnostic procurement, so the dynamics of the industry could shift from CAPEX-led investments to OpEx-led ones with the move towards open source and cloud-based workloads. So, once the auction takes place next year in an optimistic scenario, 5G test licenses will be followed by technology trials, industry formulation, global and regional cooperation with network sharing. So, the real commercialisation is only expected by 2022 or 2023 realistically.” 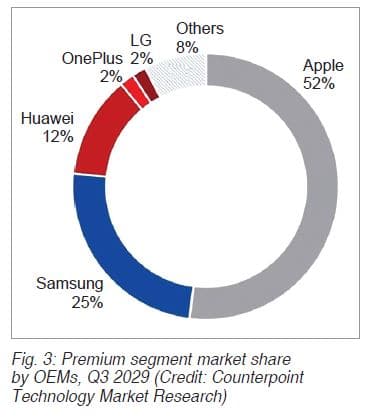 According to a report of COAI, the telecom industry, along with DoT, is leaving no stone unturned in making India 5G ready, and by next year, India will be on a 5G map. To ensure the commercial deployment of 5G, a high-level 5G India forum has been instituted where experts across the globe are collaborating and discussing challenges and opportunities, making India a true 5G powered nation. Prime Minister Narendra Modi’s ambitious Digital India programme and better telecom and Internet connectivity will benefit each other. 5G will open up new opportunities and catapult India’s transition towards digital empowerment.

5G market forecast
The 5G economy study stated that by 2035, the entire world would understand the huge potential and benefits of 5G as it is expected to have a positive impact on various industrial sectors. It is likely to produce up to 12 trillion dollars worth of goods and services. In India alone, the 5G is expected to push the economy to 1 trillion dollars in the coming years, at the same time, it is now being witnessed as a potential game-changer with an ability to offer an economic growth of more than one trillion dollars by 2035. The success of 5G requires huge global investments, which is speculated to surpass 3.5 trillion dollars between 2020 and 2035.

The overall expenditure on 5G is expected to reach 88 billion dollars by 2023, according to Heavy Reading’s Mobile Operator 5G Capex. The statistics above display the expected global yearly growth of investment in the telecommunication industry from 2019 to 2023. IDC expects the total 5G and LTE router/gateway market to grow by 3 billion dollars in 2024 worldwide, at a compound annual growth rate (CAGR) of 21.2 per cent. IDC projects the number of 5G connections to grow by 1.01 billion in 2023.

Yash further adds, “The domestic 5G mobile phone market is still expected to be below 50 million dollars mark in 2020. There is still a long way to go to have a mature ecosystem for justifying the CAPEX investment by operators. Jio, in its current shape and form, with all PE investments, is best poised to take a lead in the 5G space—but it could only happen with the best mix of B2B and B2C/B2B2C models. As for any technology generation to succeed, there needs to be a timely push and a timely pull from the regulatory department in the right direction, and that’s what India needs.”

Challenges of 5G communication
The biggest challenge is of course handset cost and localised use cases. Currently, 5G smartphones are available in the price range of ` 40,000 and above. Due to the Covid-19 crisis, manufacturing is impacted, and so is the supply chain. Another challenge is to maintain the infrastructure in such difficult times of lockdown. Field forces faced a lot of issues in keeping towers and cables up and running. There was also a quick requirement of expanding the network capacities, which meant working round and against the clock.

According to COAI, while talking about 5G in India, the issues about the spectrum cannot be ignored. Traditionally, the spectrum has always been expensive. In India, 20MHz blocks in the 3,300-3,600MHz band for 5G services have been priced at 49.20 million dollars per MHz by TRAI in its recommendations. In Korea, for example, the same band was priced at 17.2 million dollars per MHz in auctions. The most critical factor in the uptake of the 5G spectrum would be its price. The 5G high-level forum has lately recommended early allocation of 5G spectrum, increasing the quantum of spectrum available and reducing the prices. The initial expenses on equipment would also be costly.

For 5G effective deployment, operators will have to wait for the current pandemic to pass. The latency, throughput, and scale are important factors for any use case deployment, but battling out current challenges pertaining to procurement, proving the ROI for a use case, cultural alignment with DevOps teams, adoption of microservices, and seamless use of orchestration platforms remain crucial for 5G’s success in India.