Kitchen Appliances Get A Technology Makeover - Electronics for You

You Can Travel In Drones And Eat Them Too

Kitchen Appliances Get A Technology Makeover 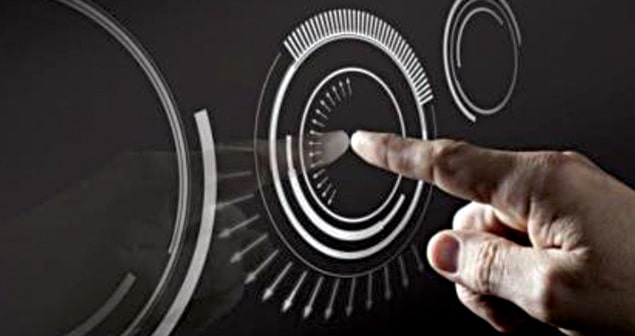 Over the years, touch screens and the Internet of Things (IoT) have become immensely popular as the cost of producing them has decreased. The touch buttons, sliders, and wheels used in kitchen appliances have become a good substitute for mechanical buttons and knobs, as they are more reliable and also reduce the overall cost of the system

Touch screens on washing machines or refrigerators were just concepts as recently as five years ago. Concepts that induced a ‘wow’ factor at events such as the annual Consumer Electronics Show held in Las Vegas were a demonstration of the capabilities and vision of the exhibiting electronics companies. Today, home appliances have taken the leap and touch screens and the Internet of Things are increasingly evident in the common places as the cost of producing them is decreasing every day. Internet connectivity has become more affordable, its reach is ever-expanding and appliances are now being augmented with app-enabled features such as the human machine interface (HMI), without compromising on the aesthetics and being more environmental friendly.

Bringing capacitive touch technology to appliances
Mechanical buttons in kitchen and home appliances were not durable or very user friendly as they would break or stick to the user’s fingers with time. Grease and water are common factors in kitchens, and mechanical buttons were not adaptable to these substances. Capacitive touch buttons, sliders and wheels are a good substitute to these buttons and knobs, as they are more reliable and also reduce the overall cost of the system. Touch sensors located beneath or behind a glass or plastic surface also make it easier to clean the surface and allow for more aesthetic and stylish design options (See Fig. 1).

1. Remote maintenance
2. Better understanding of usage with data mining and analytics, which can lead to product improvements or customisation
3. Power management—syncing high current appliances to avoid spikes on the power line
4. Firmware updates for remote bug fixes and product enhancements

But IoT enabled home and kitchen appliances can also benefit the end-user. Manufacturers, for instance, can provide:

1. ‘How to use’ instructions for some appliances, or recipes and even some best practices that could be by way of videos or easy downloads. Laundry appliances such as washing machines or dryers could come with their own instructions on usage of washing machine powder, type of washing powder or liquid and quick troubleshooting instructions. Firmware updates to add new features and improve performance.
2. Weather, news and other updates based on user preferences.
However, with all of these benefits for suppliers and users, there are a few design issues that must be addressed.

Addressing white goods application issues
Appliances that are fitted with touch screen HMIs are challenged when it comes to noise, moisture or recognising touch screen commands from a user wearing gloves. If manufacturers of these appliances can address some of these issues with their IC or touch screen controller, then their products will definitely have the edge.

Noise. For noise immunity, patented technology allows the controller to be more immune to the noise coming over the power lines. In several areas, power lines generate a lot of noise because of the lack of an earth ground or poorly connected grounds. That noise conducts into the power supply through the power cable and gets routed to the touch controller IC.

Being an extremely sensitive component that measures nanocoulombs of charge, pulling even a tiny amount of charge away by simply touching the touch screen with a finger needs to be interpreted consistently and accurately. Noise can inject significant charge into the sensor and hence a touch controller without sufficient noise immunity can lead to confusion in the interpretation of signals, which is critical to the proper functioning of the appliance. In case of a ghost touch or false touch event, there’s an erratic behaviour of buttons where they start pressing themselves randomly. Imagine if you are using an oven and this were to happen, it can have dangerous consequences. The same random-ness could affect other appliances and lead to unstable and dangerous scenarios. This is an issue for every capacitive touch controller, but patented technology circumvents conducted noise and can help control the issue.

To solve the noise problem, the controller filters common-mode noise and avoids noise issues through a frequency hopping scheme. The patented approach utilises self-capacitive touch as well as mutual capacitive touch scanning and involves differential touch sensing. Instead of treating each sense line as its own individual element, the IC measures the difference between pairs of sense lines and is able to eliminate noise common to both sense lines. If, for instance, the same noise occurs from a similar region of the display, it is cancelled, retaining only the valid signal. This differential touch sensing provides a very effective level of noise cancellation/rejection.

Washing machine motors, refrigerator compressors or inductive cooktop burners radiate noise that is within the acceptable noise cancelling frequency band, and hence touch screen displays for these appliances are more robust. False touch events are thus avoided in these instances. However, in the case of a legitimate touch, it must be reported and detected to the host controller to avoid a missed touch event from noise, so that user expectation of a response is met.

Moisture. It is natural for moisture and wetness to occur in laundry rooms and kitchens, which are a necessity while cooking or washing. Imagine boiling water for tea and it spills over on to the touch screen, a false event could also occur. Mist, droplets of water, liquids of any kind could affect the responsiveness and functionality of the touch screen. This means, touch screen designers of HMI appliances need to create designs that can detect a touch despite water or moisture. Multi-touch operations, from the standard two touches to perhaps ten or more by multiple users at the same time, must be made available by appliance designers for larger displays. If water is pooling when the user touches the screen or if a larger drop falls onto the horizontal screen, false touches induced by water should be suppressed and normal single finger operation should be supported. Designers should design to avoid false touch events from highly conductive liquids like salt water and even cleaning solutions like bleach. Fig. 2 provides a brief look at what happens behind the display panel. 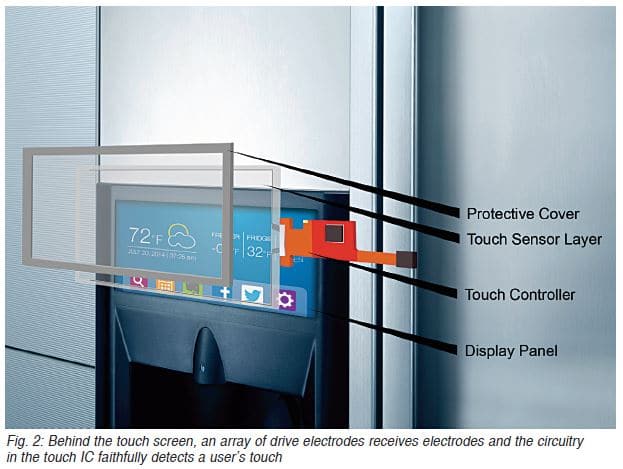 Gloves. Users use thin or thick gloves fairly often in the kitchen or laundry rooms, especially when a kitchen sink needs to interface with a refrigerator or stove touch screen. HMI touch screen technology needs to start supporting glove use. Today, several such capabilities on touch screen ICs used in home appliances are often overlooked but could provide significant value to the end-user. When turned on and tuned during the development stage, the optional glove support feature in the controller could provide multi-touch (up to ten touches) for gloves typically used in kitchens (about 1.5mm thick). For cooking, thick (up to 5mm) gloves or oven mitts often made of silicone are used. With glove support, the controller can still provide accurate input to the HMI. This can occur automatically without the need to enter a separate mode and return to the normal sensing level when a glove is not used.

In contrast, some controllers require users to select between modes like moisture, bare finger, stylus and glove rather than automatically detecting and adjusting settings on the fly for natural, intuitive user interactions in all environments.

In such applications, the user interface tends to be simpler with larger buttons and needs to be incorporated at the design stage of the touch screen, for appliances that take advantage of glove support.

Choosing the right touch controller/sensor/screen
Depending on the size of the kitchen or laundry appliance, there are a variety of screen sizes that can be used ranging from 7.6cm (3-inch) displays for coffee makers to 12.7cm (5-inch) for microwave, stovetops and washing machines and up to 55.9cm (22-inch) and larger for refrigerators and freezers.

In the appliance supply chain, the chip supplier provides the chip and the design of the sensor in partnership with a sensor supplier. Together they perform the system integration and typically a module/display manufacturer integrates the system including the touch sensor and the touch interface, which is then provided to the appliance manufacturer (see Fig. 3). This is an example of how a semiconductor supplier today not only provides just the chip but also services such as tuning the chip, making it easier to use in the entire supply chain. 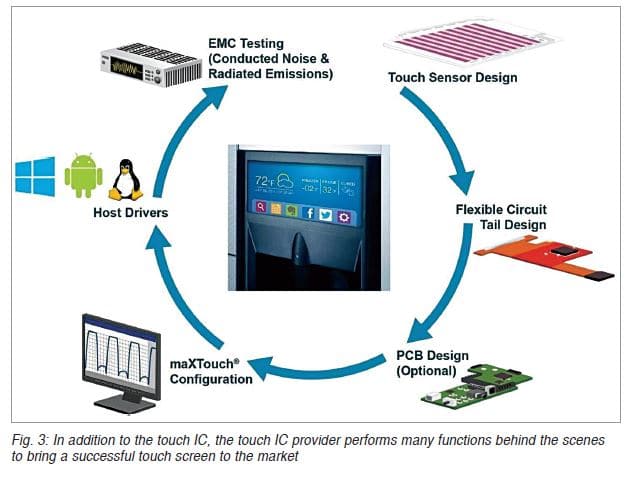 Operating in the industrial -40°C to 85°C temperature range, the standard IC ships with standard firmware and is able to address a variety of display sizes and different appliance manufacturer requirements. Touch screen designs are more scalable, thanks to the wide range of screen size options available in the appliance touch screen controller family. The ready availability of the right screen size reduces design time and lowers system and development costs. Table here shows some of the design parameters for industrial-grade appliance displays.

In addition to screen size, other parameters can impact the choice of the chosen controller, especially if there is an overlap in screen sizes.

One final consideration is electromagnetic compliance (EMC). Obviously, the design must support EMC. Then testing must verify that it achieves the desired results for both conducted and radiated emissions.

The design touch
For early engagement and improved awareness of touch screen capabilities, a designated evaluation kit is available for each of the controllers in the appliance touch screen family. The kit includes a printed circuit board (PCB) with a touch screen controller that has a passive flexible printed circuit (FPC) tail that connects the touch IC to a touch sensor on a glass/plastic lens. The kit connects to the host PC via USB and includes all necessary cables, software and documentation. 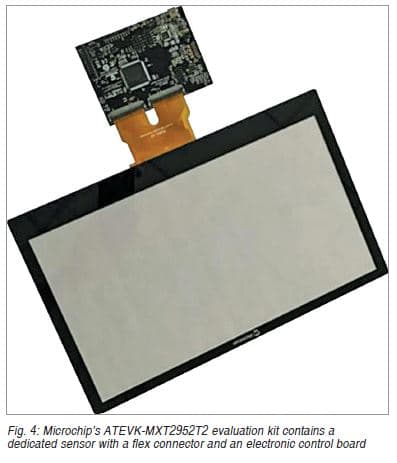 The final touch
IoT is here and now, appliance manufacturers need to think about improvements that can benefit the end-user. Touch screen enabled appliances must be equipped to read or input information in any context. Appliance manufacturers need to work with an IC supplier, or touch screen or module supplier who in turn works with an IC supplier, where touch controllers are designed specifically for appliance applications. With the right touch controller, appliances can provide internet connectivity and have noise immunity, moisture immunity and glove support.