Aerial revolution in construction sector - Electronics for You 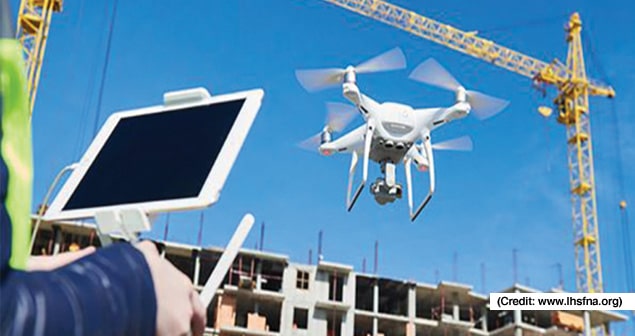 Unmanned aerial vehicles (UAVs) or drones are playing an important role in the construction industry. In recent years, they have become an ideal choice for land surveying, building inspections, security surveillance, marketing, monitoring on-site activities, and so on

Unmanned aerial vehicles (UAVs) or drones have emerged as extremely viable tools for various sectors, ranging from geographic mapping and disaster management to climate change research, precision agriculture, and much more. Even while flying at lower altitudes, drones can capture aerial data with high accuracy at better speeds and lower cost when compared to manned aircraft or satellites.

In the construction industry too, drones allow easy access to difficult-to-reach sites and structures, such as unsafe steep slopes. This makes them an ideal choice for land surveying, building inspections, security surveillance, marketing, mapping data, monitoring on-site activities, logistics, demolition, and so on.

Selection of the right drone for an application results in better performance. Various parameters like camera resolution, quality of different components and the height of flight can affect the accuracy. Components of a commercial drone include flight controller, motors (preferably brushless for noise mitigation), propellers (standard/pusher), receiver and transmitter, batteries (lithium polymer), electronic speed controller (ESC), landing gear, flight controller, sensors such as light detection and ranging (LiDAR), and the like.

The flight controller is the brain of a drone where all the decisions are made. The transmitter is responsible for the transmission of the radio signals from the controller to the drone, while the receiver is responsible for their reception. These components along with sensors need to work properly in order to issue commands to the drone on time while flying. An ESC interprets signals from the flight controller, and converts them into phased electrical pulses to determine the speed of the motor. A motor with a lower rating will usually produce more torque and that with a higher rating will spin faster. A heavier propeller will require more torque from the motor for motion than a lighter one. Finding the right balance between the specifications of these components makes all the difference.

In a drone survey, aerial data is captured with RGB or multispectral cameras in cases where colour and near-infrared imaging needs to be performed simultaneously, and LIDAR payloads for measuring distances remotely. Images are taken several times from different angles based on site area and are usually saved on a memory card. They are geo-tagged with coordinates using a geo-tagging software. The images are then imported into photogrammetry software that processes this data to create elevation and 3D models, geo-referenced orthomosaics, volumetric measurements, and so on.

In one such example, a construction and asset management company, Graham construction, saved time and money by employing eBee Plus automated mapping drones to do topographic surveys for building and civil engineering projects. This is important for tracking progress in real-time without missing any corner of a site. Pix4D photogrammetry software is used to process the drone’s imagery and create digital point cloud and contour model outputs.

The previously used terrestrial surveying methods were not only expensive but also risky at times, such as while working on the on-site quarries. The tedious task of data processing and volume calculation, which had to be done separately by specialists, is reduced using drones. It also saves surveyors from traversing dangerous sites, as aerial photography can be done at the same time without separate equipment, according to sensefly.com.

Chasco Constructors is another company that started using drone technology for construction and site monitoring. For one of the projects, they used DJI Phantom 3 Pro drone and drone-mapping software from DroneDeploy, which resulted in the completion of the project before the estimated schedule. According to data sourced from dronedeploy.com, the total budget for the construction of the 6,500 square-metre structure was 29 million dollars. The replacement of most manual tasks with drone mapping slashed the survey costs by 75 per cent.
Startups like DroneBase and Garuda Robotics also offer services like aerial surveying to architecture, engineering and construction (AEC) industry, among others.

Extreme temperatures and wind can affect drone operations. Another issue is that battery power may not be enough for complete inspection of big sites. Also, since a malfunction such as a damaged propeller can cause the drone to crash, an operator should avoid flying over areas where people are present. A qualified person must pilot a commercial drone to prevent damage and necessary permissions need to be obtained. With enough precautions, drones are capable of shifting the overall paradigm in the construction sector and bring in innumerous benefits for the industry.